Wintergreen stands in Southern Rockfish Valley, on the west side of the south fork of the Rockfish River. Hawes N. Coleman purchased the land on which he later built Wintergreen in April of 1789. Coleman acquired land in the Valley until he had accumulated more than 1000 acres by 1807. Wintergreen became the first house he built between 1815 and 1828 in Nelson County. Hawes died in 1840, but his will, having no witnesses, took some time to settle.

The house is situated on a high hill in a grove of spruce, oak, and other native trees and enclosed with a plank fence. Wintergreen is a single-pile, central passage, I-plan, seven-bay, two-story, Federal style house. The house stands on a raised brick foundation of Flemish bond on the main section, Coursed bond on the west wing, and poured concrete on the east wing. The basement is located under the center section and rear ell. The house has three gables on its center section and a hipped roof on the wings.

The house is a frame structure. The entire house is covered with poplar, beaded weatherboard, and brick fills the space between the outside and inside walls of lathes and plaster. This method, noggin, perhaps was used for insulation, strength, or both. Inside, the walls are made of plaster and wainscoting. All of the framing used in the building was cut on the place, hand-hewn and hand-sawed and put together with locust pins and shop-made nails.

Wintergreen was probably built in two sections. The first part is a lower and smaller structure standing on the back, west side of the present building. It is likely that this building may have been separate, but later attached by a first story breezeway to the later, front building. Its origin and possible use are unclear, since further restorations destroyed the “builder’s trench.” Some sources suggest its use as an early kitchen and dinning area for the Coleman family, or temporary living quarters. This early structure, which appears to have been built in stages, has partially collapsed, as has the ell monumental chimney in a 1971 survey photograph. The north end of the ell stands on a high brick foundation laid in three-and four-course American bond. The section adjacent to the house continues the same roof level, but is actually a story-and-a-half on a low brick foundation.

The second section, the main block, is situated in front of the early structure. There is a short wide hall in the front of the house with a large room on each side and a one-story wing on each end of these rooms. The wings were added by 1830. The east wing appears to have been rebuilt some time in the twentieth century. Two large chimneys stand on either end of it to serve the fireplaces that provided heat in rooms. The chimneys are Flemish bond and notable for the barrel vaulting where they join the house at the top.

The imposing two-story, two-level, three-bay pediment portico features square Tuscan columns. The original bow-not or shaves-of-wheat railing, visible in the 1971 photographs, is completely gone. A full entablature with carved triglyphs and cornice decorated with square blocks carved in a leaf pattern surmounts the portico. An unusual eye-shaped oval dominates the pediment. The portico steps are missing. No porch survives on the rear. The front door is off-center not only on the exterior but interior passage as well. The wide door has nine raised panels and a plain architrave. A four-panel transom tops the door. The windows appeared to have been nine-over- nine on the first floor, and six-over-nine on the second floor. Louvered shutters survive at a few windows. 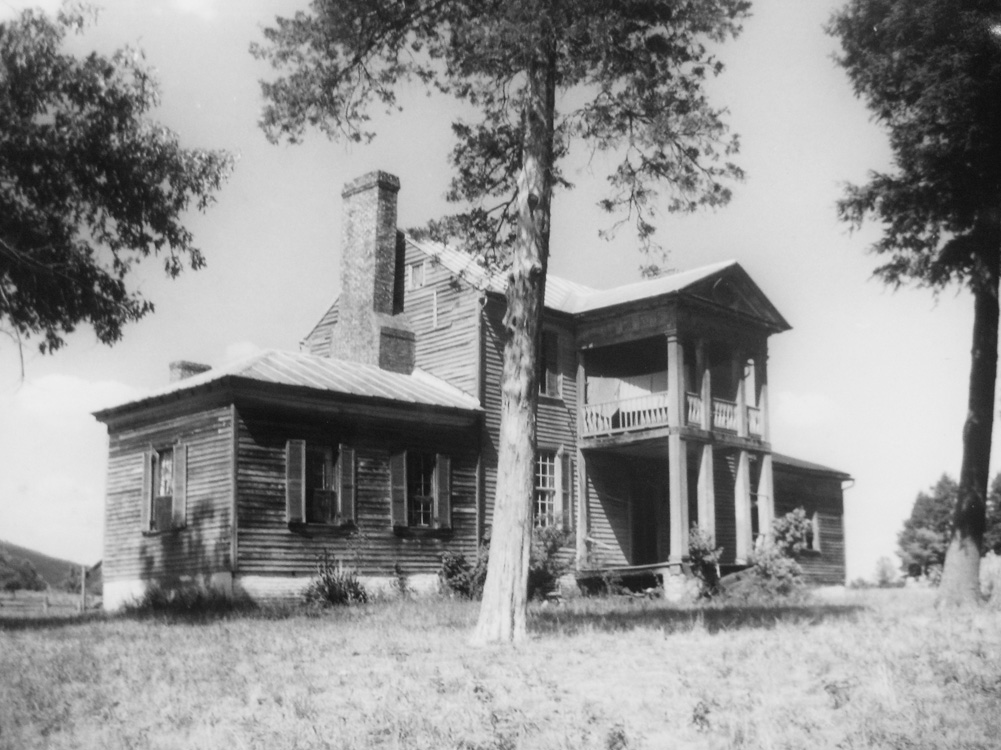 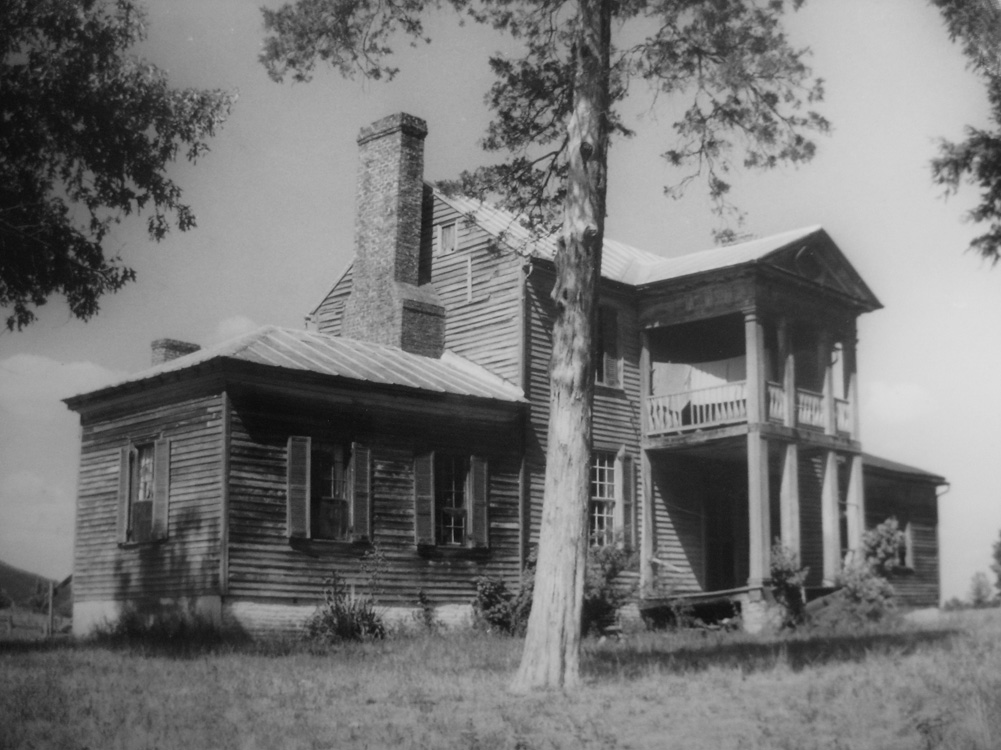 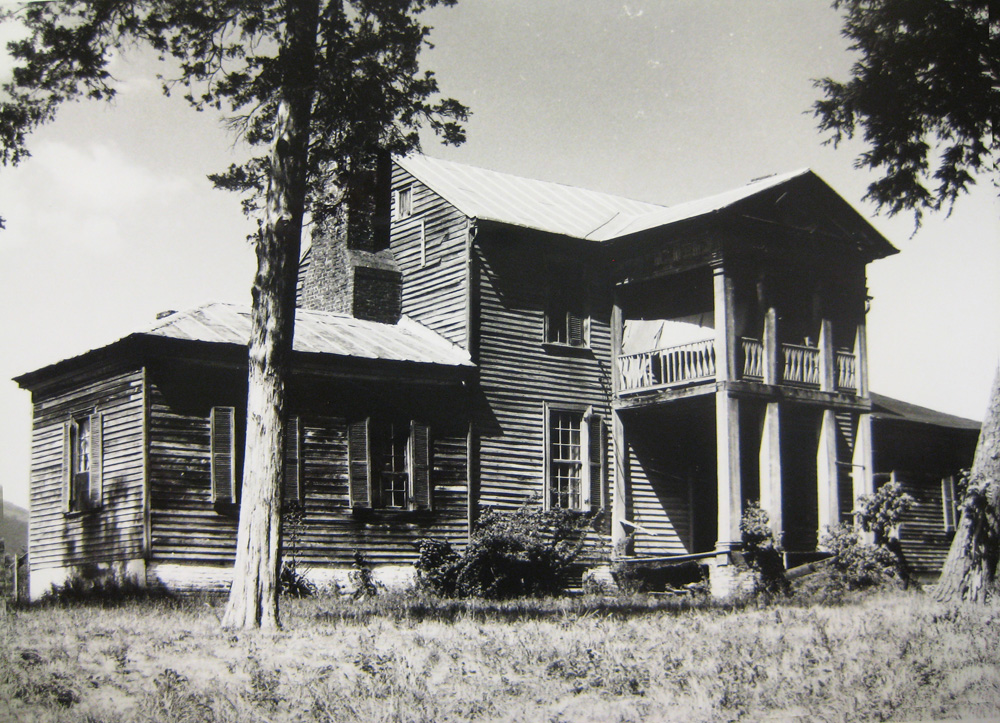 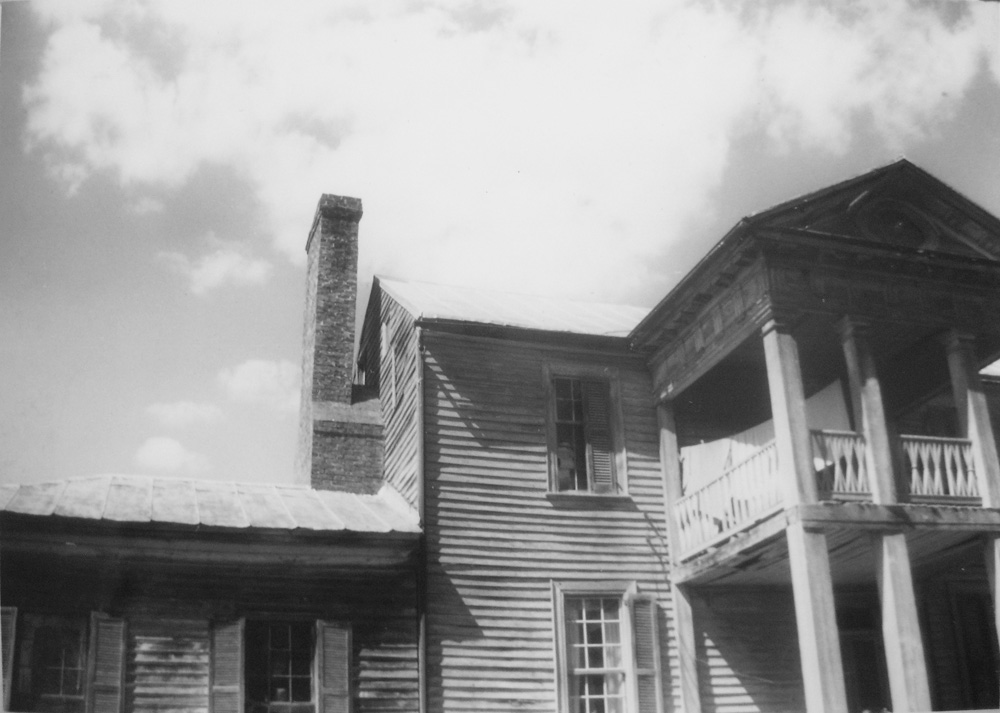 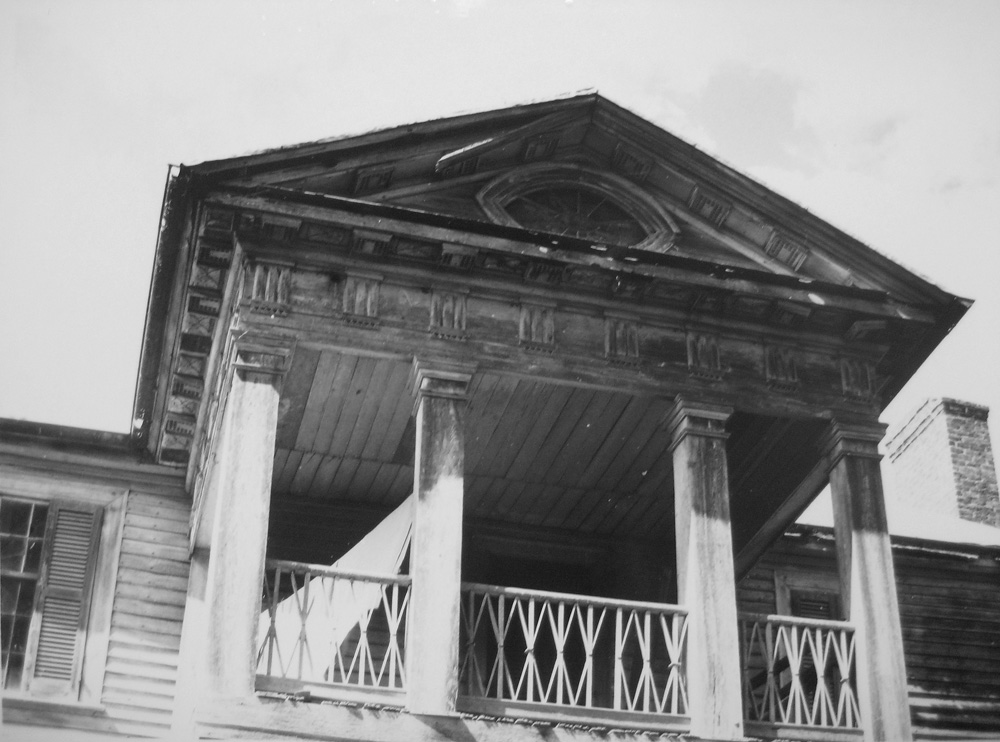 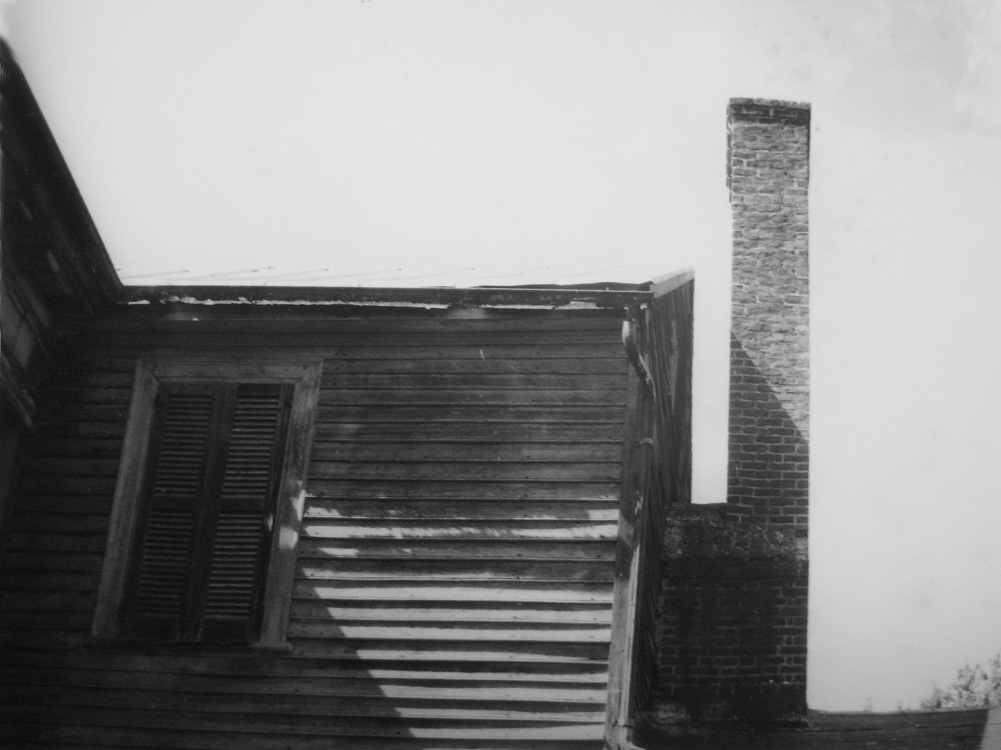 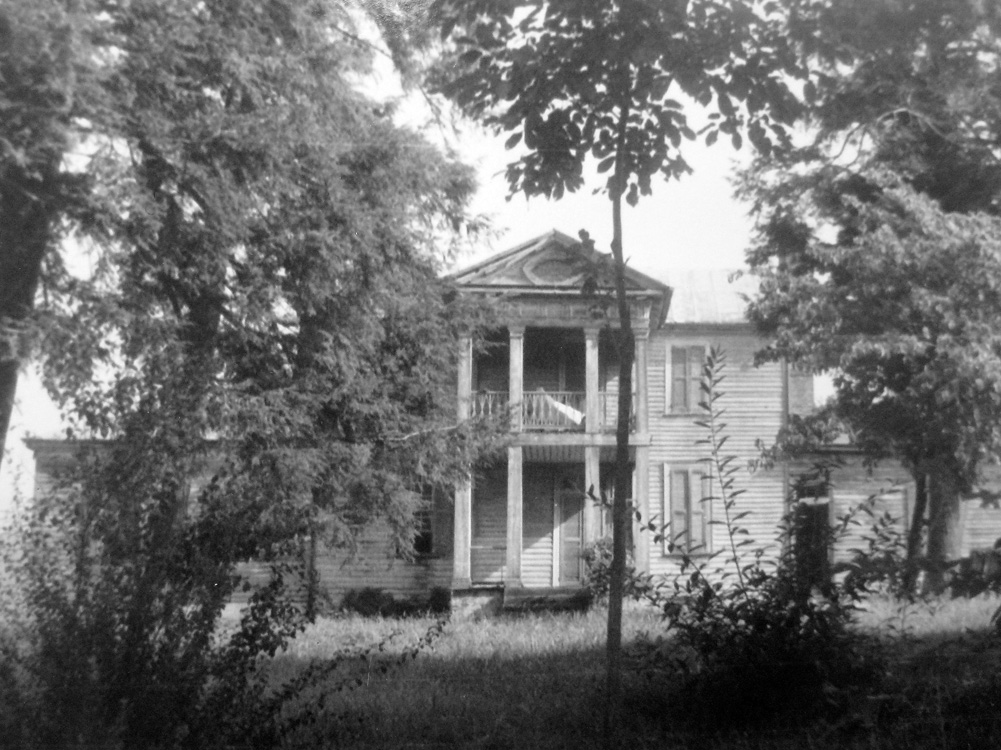 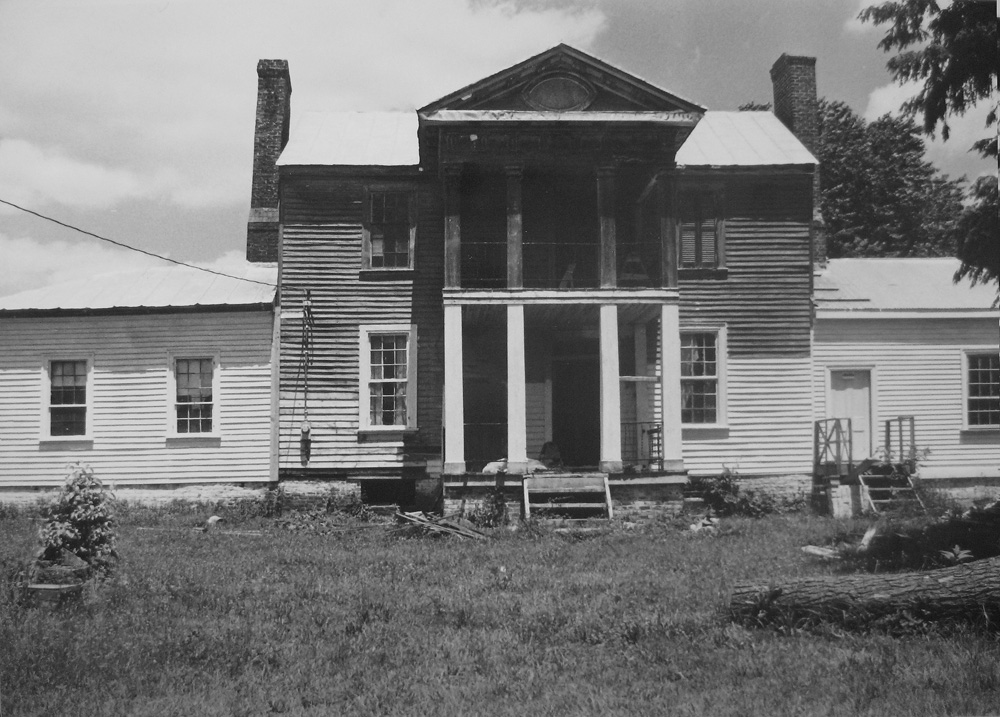 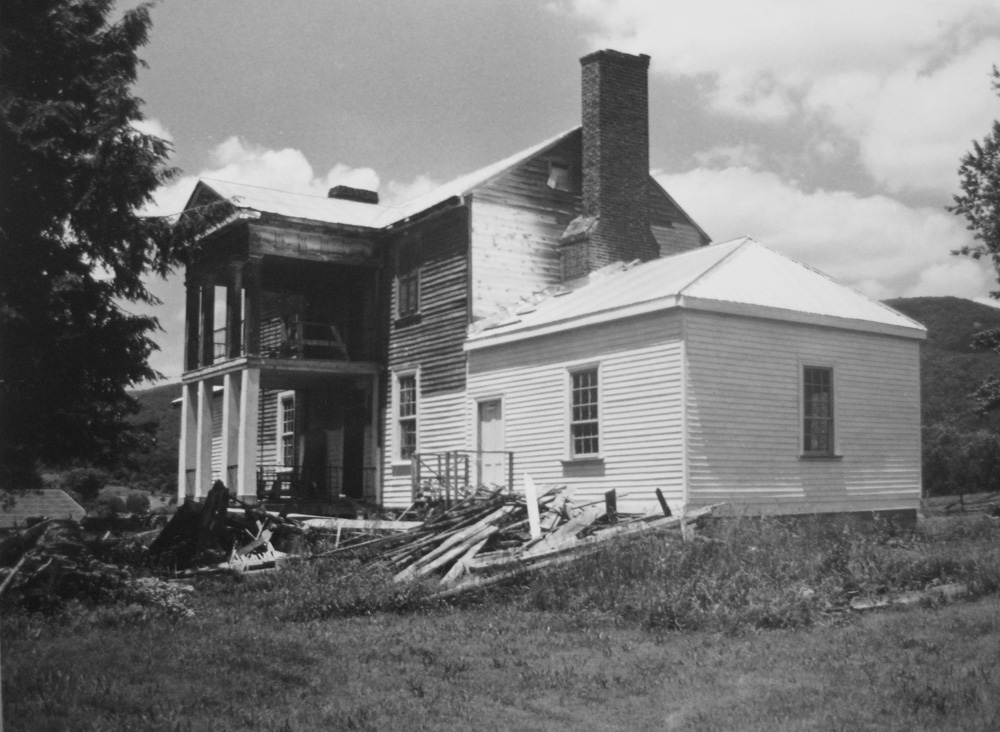 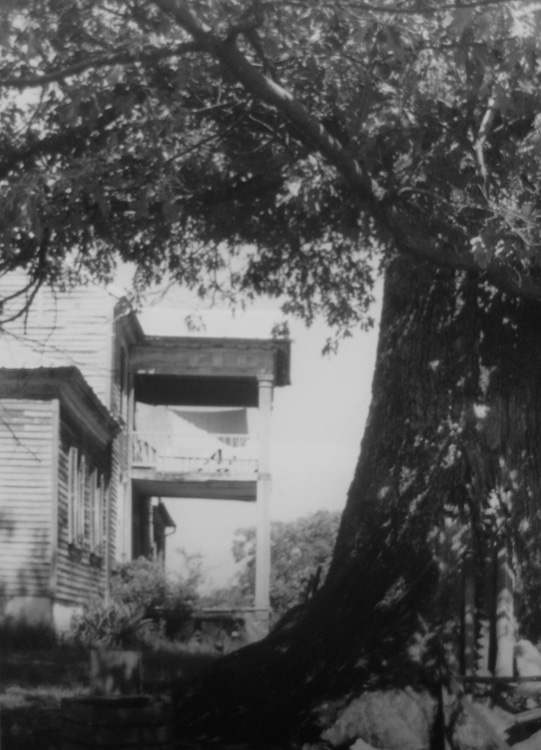 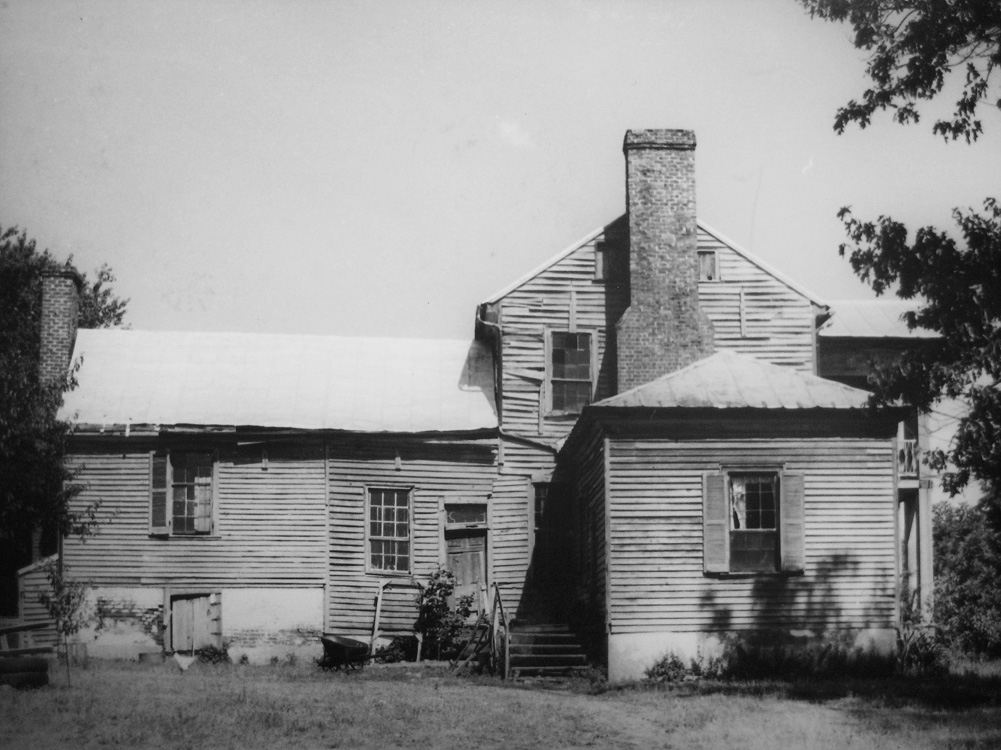 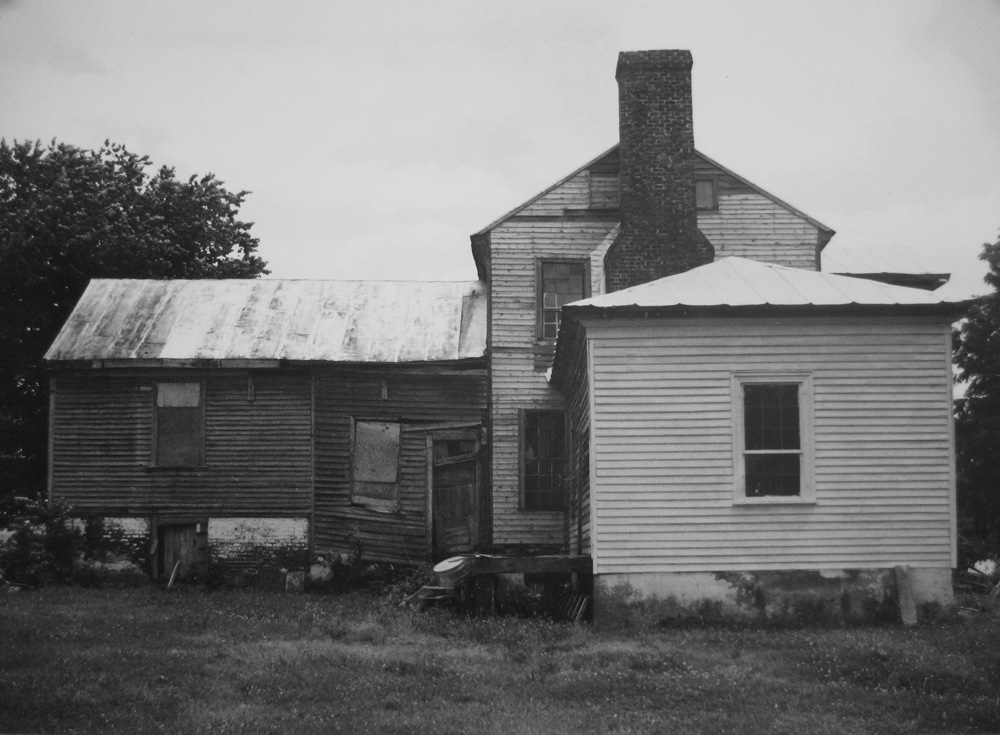 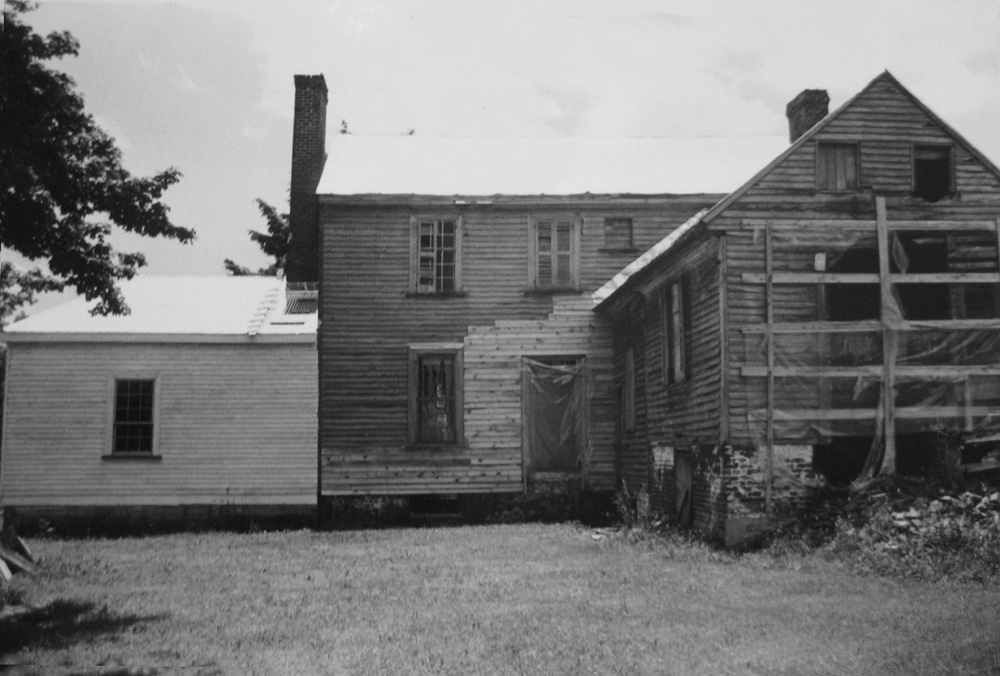 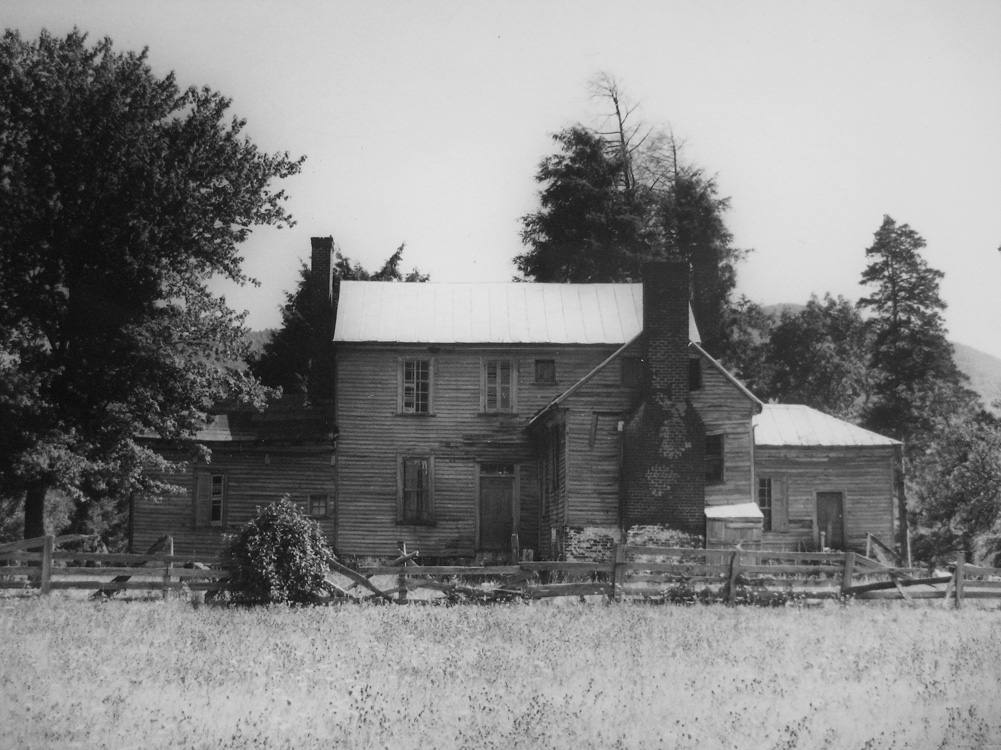 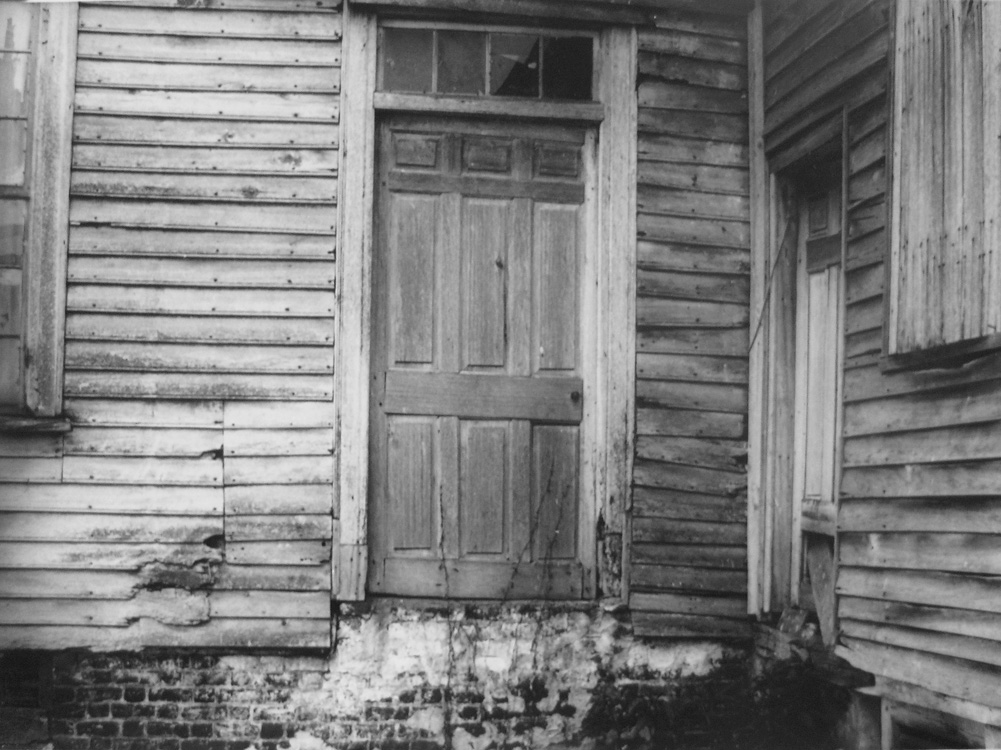 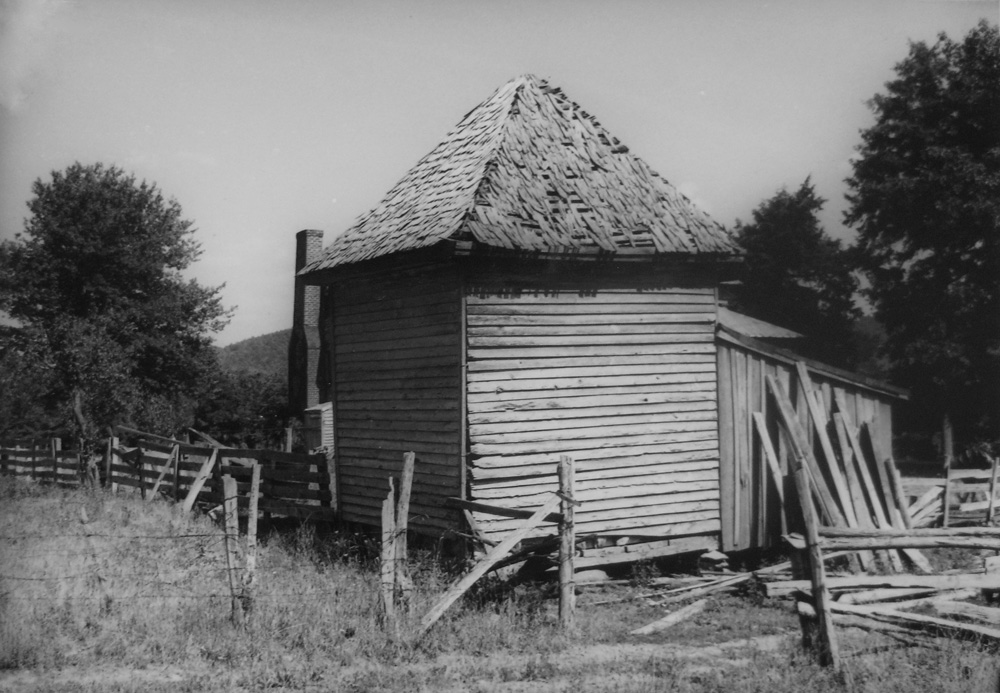 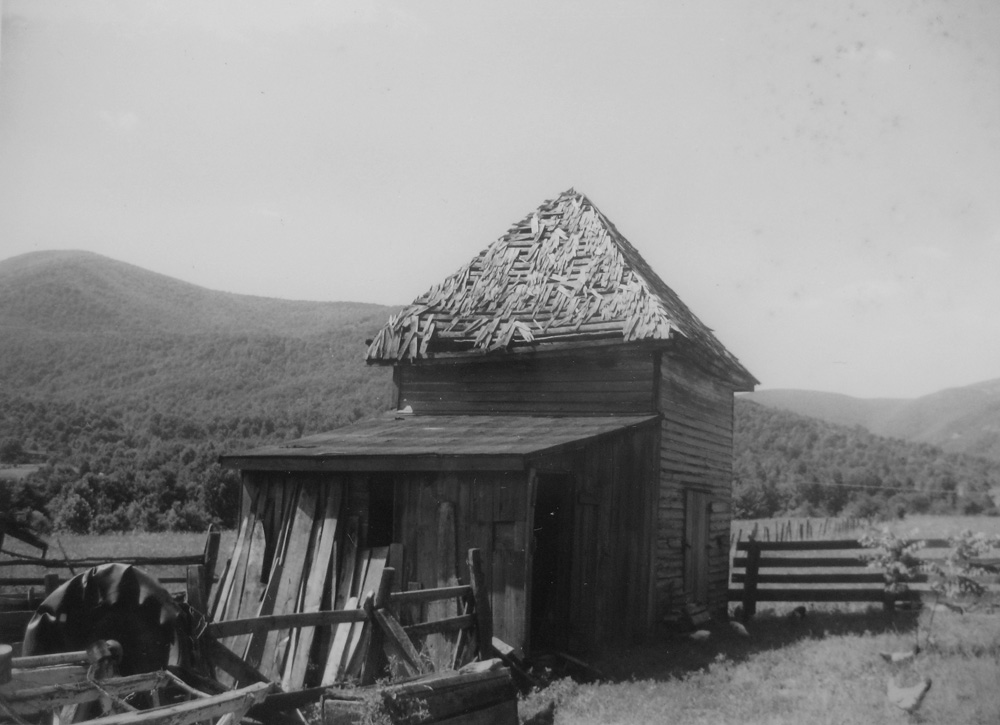 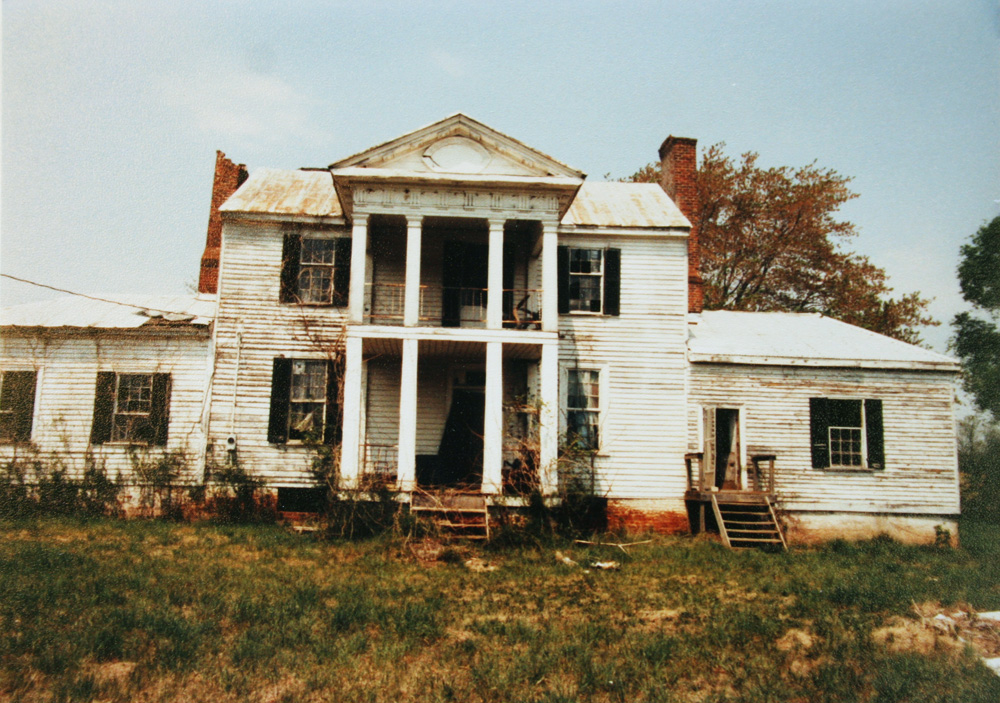 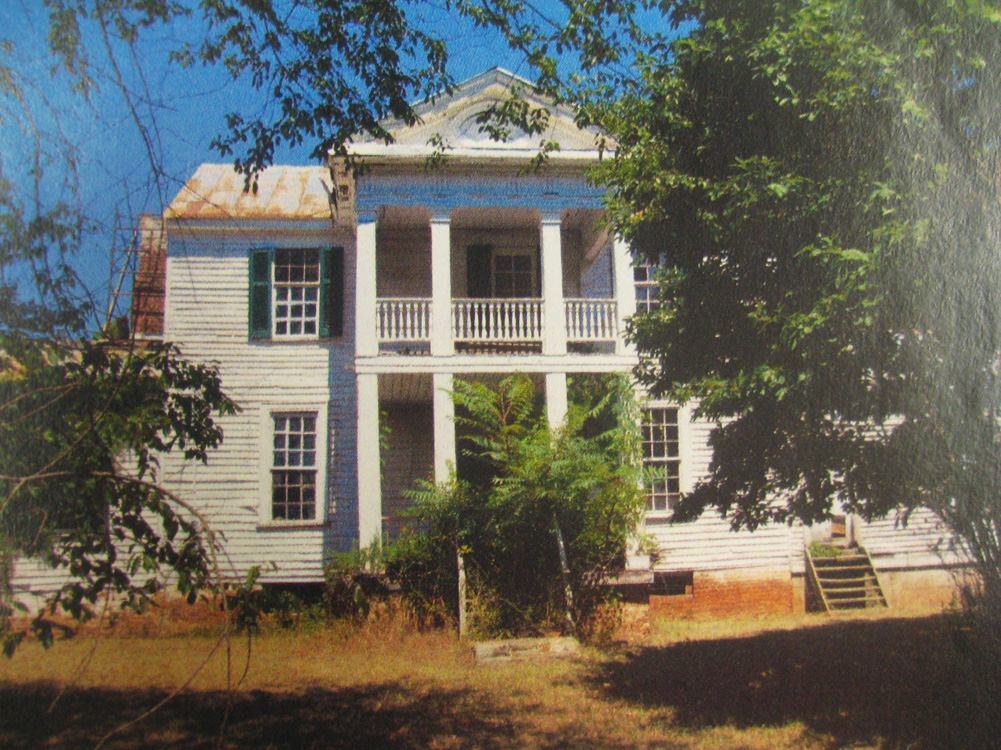 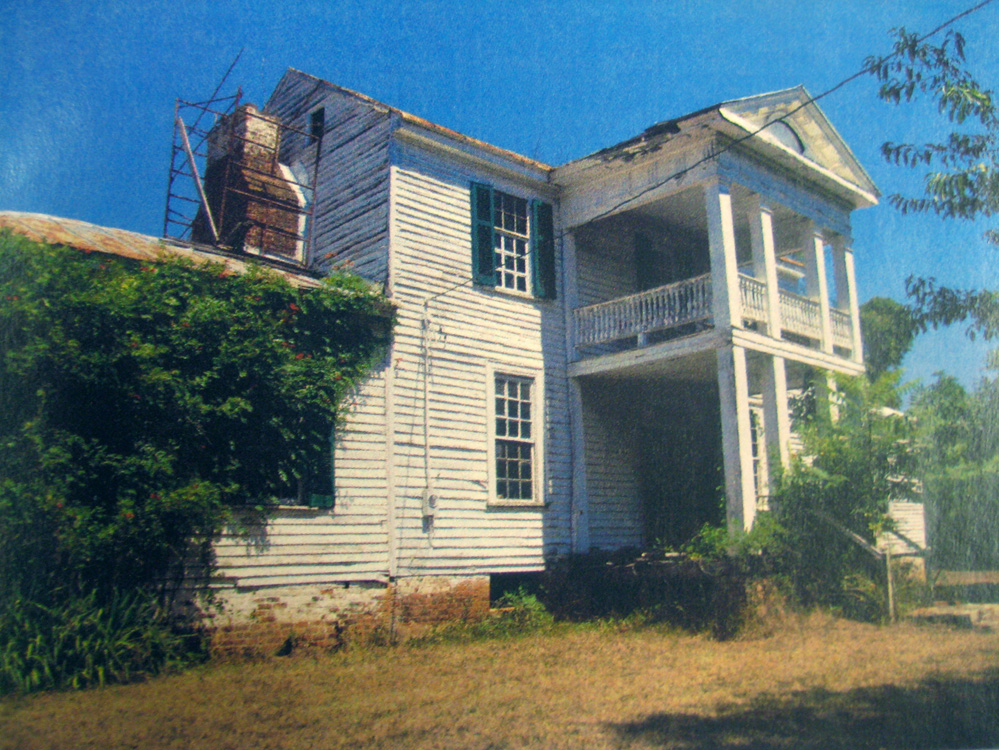 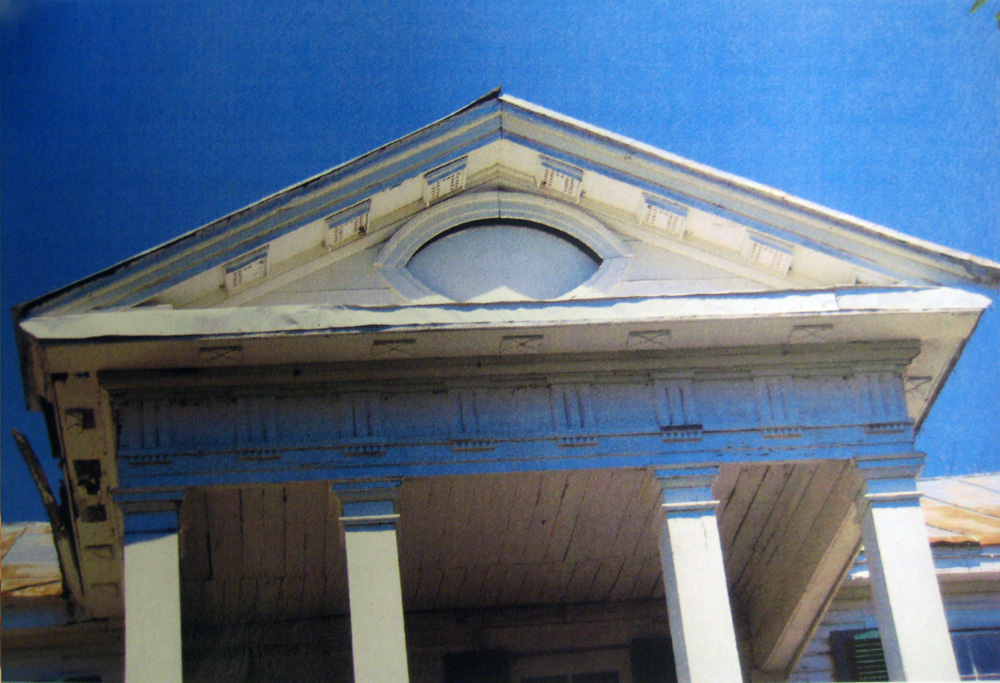 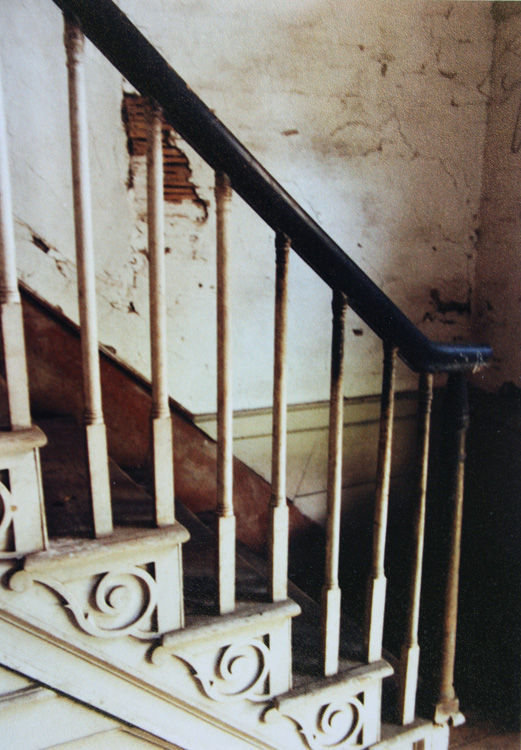 The walls are plaster over split lathe and brick noggin. Original fireplace openings have segmental arches, while later ones have square openings with metal lintels. In the center passage, the front and rear doors are aligned with each other in the passage but are off center –up against the east wall- with eared or flanged architraves. Horizontal board wainscot, topped with a wide chair rail with projecting cornice is found in all rooms of the central section of the house.

The single-flight stair faces the rear of the house. The stairway is very elaborate, hand-carved: the stair brackets, carved in a vine-like motif, are typical for this period, but are the lightest and most decorative found during the 1992 Nelson County intensive survey.

Wintergreen’s main floor rooms are approximately twelve feet tall, and rather long and narrow, probably to allow more than the traditional two over two rooms. The east room windows feature the same, eared architraves as found on the passage doors while the doors in the room have double fascia surrounds with protection molding. The east wing room has been rebuilt and has sheetrock walls. Architraves in the west room are two fascia boards with projecting molding. The west wing room features a slightly narrower chair rail that found in the main rooms and no wainscot. It also has picture molding. An unusual feature of these two rooms is the large chimney they share. The fireplace openings for each room are not back to back, but adjacent to each other. The section of the brick visible in the west wing room (where the mantel is missing) reveals the brick is laid in Flemish bond with pencil joints –indicating the wing was a later addition but added by mid-nineteenth century.

The main rooms on the second floor have a high, double-board wainscot with wide chair rail with projecting cornice like that found in the center front passage. Access to the attic stairs is through the west room. On the second floor, the main block is connected to the lower, west building by a set of steps, leading down from one upstairs room, to a lower upstairs room of the western building. The connecting room to the rear ell, features plaster walls above paneled wainscot with crown molding, the finest in the house. Stairs up to the north end of the ell, to the half-story above, and down to the cellar all entered this room, although only remnants survive today.

The floors are four-inch plank. The doors are solid wood, ranging from plain to four and six-panel with sidelights and fan over top. The house has lost much of its architectural integrity due deterioration and loss of most of its interior features.

The area has become overgrown and no traces of original landscaping or gardens survive. About a quarter mile east of the house are two cemeteries. The oldest is the Coleman cemetery. A rock wall with concrete cap and a cast-iron gate surrounds the cemetery. A mixture of fieldstone and commercial gravestones are found. The grave of Hawes Coleman, Revolutionary War soldier and builder of Wintergreen, is marked with a modern granite marker but originally had an inscribed fieldstone marker. The Harris cemetery is surrounded by a modern rock wall with concrete cap and wrought iron gate. The majority of markers are plain marble gravestones. The only outbuilding to survive is the smokehouse.