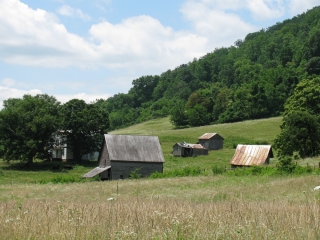 The majority of early Nelson buildings were small one-room structures; memoirs and documents from this area substantiate this theory. The Shenandoah Valley provided different influences. Trading ties with areas west of the Blue Ridge brought Nelson County residents in contact with the Scotch-Irish and German artisans who demonstrated a willingness to experiment with form and style. Their use of graining and spongework as decorative treatments found its way into many Nelson County homes. Few these early dwellings remain; generally, the larger, more sophisticated, and more stable examples of early Nelson construction are what have survived. Eighteenth and nineteenth century rural dwellings in Nelson County consisted primarily of plantations and farmhouses.

While living in a somewhat region, Nelson County residents were aware of architectural styles and trends. The trading, kinship, and friendship patterns of the major landowners brought in a variety of concepts that may not ordinarily be associated with an area of mountains and valleys.
However, the majority of antebellum buildings in Nelson County demonstrate little evidence of high-style ornamentation. Of those that do, most feature the Federal style. Early local builders and contractors had a preference for the late Georgian style, which persisted into the early nineteenth century. The Federal style is also well represented in Nelson with several fine examples. The survival of houses with these two earlier styles and their relatively unaltered state may be the result of the agrarian nature of Nelson County and its reluctance, or inability because of expense, to change. Nelson has also largely escaped the growth pressure experienced in other areas. Subsequent styles such as Greek Revival, have less impact in the county, due to the fact that major construction had already occurred. By far the most common postbellum house design in the area is the I-house with a single-pile, two-story, and center-hall plan dwelling. This type of house often has a one or two-story rear ell.

During the first portion of the twentieth century, the village centers of Nelson County increased significantly in population, and thus, in new house construction. Although many of these twentieth century houses featured irregular floor plans and vernacular styles, two styles of houses were commonly constructed in the county in the period prior to World War II. The bungalow, a popular national style of the early twentieth century, is represented in each of Nelson’s villages. Bungalow-Craftsman influenced designs include both eaves-front and dormer houses and central hall, gable front houses. Among the notable examples of eaves front bungalows are a large one-and-a-half story weatherboarded house on Route 56 in Massies Mill. Somewhat less common are gable-fronted, one-story or one-and-a-half story houses. Examples include the Lyle and Hazel Kidd House in Massies Mill. An unusual, bungalow-influenced design is the hipped roof house with a recessed central entrance constructed for Frank Lathrop in Massies Mill.

The second common twentieth century house style is the American Four-Square. They are square in plan and generally two stories with a hipped roof. Representative examples are the Bogia House, outside of Tyro, and the Odie Coffey House, outside of Massies Mill.